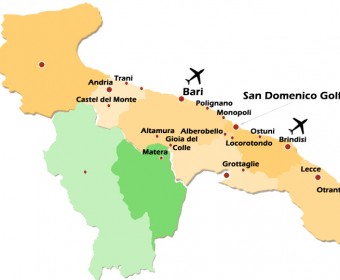 Nights: from 3 to 7 nights
Period: year round
Stay: Luxury Masseria
Meals: half board

Considered one of the best golf clubs in Italy, the San Domenico Golf is a prestigious 18 hole golf course overlooking the sea of Puglia: 6300 meters of meandering meadows that run between the olive trees along a lovely stretch of Adriatic coast, offering spectacular views of the sea.

The San Domenico Golf Club is located on the border between the ancient city of Egnathia (V cent. BC) and the harbor of Savelletri. The path winds through the rocky profile of the Adriatic Sea in the east and the vegetable fields and olive groves to the west. Created on the project of European Golf Design in London, the company planning the PGA, led by Jeremy Slessor, and signed by Andy Haggar, this Golf Club is manufactured to the highest standards conform to the specifications of the USGA.

Although the earthworks and building the necessary undulations have been consistent and relevant, the impact of these works did not substantially change landscaping the territory, but it has created the conditions for the harmonious integration between nature and man. Among the various types of turf available, bermuda was used for fairways, fro roughs the choice fell on fescue – insidious and able to fool the eye with its uniformity – for green they chosen the classic Pencross , which is characterized by the wide adaptability and resistance to trampling. The greens are very large and, although not present misleading slopes, are anything but easy to tame.

The course is a classic links, characterized by tipical Mediterranean vegetation. Alongside the low bushes of thyme, rosemary, sage and mint towering olive trees of rare beauty, which become the emblem of the field. In the background of the field stands the sea, visible from all the way, while the undisputed star of this scenario is the wind, blowing steadily during most of the year.

And for the enjoyment of golfers keen to reconcile the sporty with cultural interests, please note that the field borders on the ancient city of Egnathia, an ancient Messapic center, later incorporated into the Roman rule: in fact, next to the start of the 8th hole it can be seen a part of the necropolis, where remains have been found dating from a period from the fifth century. a. C. to III d. C., and offering only a small taste of the wonderful view of the ancient city. At 200 meters away there is evidence of the diligence and culture of ancient times ranging from the seventh century. B.C. to VIII A.D.

Masseria Cimino is a fortified farmhouse with tower dating back to the 18th century. The Masseria was built just meters from the sea, adjacent to the archeological site. In the 1700′s, blocks of stone originating from the perimeter wall of Egnatia were used in the construction of the farmhouse, on the walls of which markings dating back to the Ancient Roman period can still be clearly seen.

Surrounded by expanses of vegetable gardens and century old olive groves, the Masseria stood at the center of an important agricultural estate, specialized in the cultivation and the preserving of fruit and vegetables. Selection, pressing, packing, and storage were all carried out in the farm’s various outbuildings. Like great part of the Masseria in Puglia, part of the main farmhouse was used to lodge the workers and as occasional residence of the landowner.

This family-run property offers a pool and interesting rooms in white stone. Rooms are located on the ground and first floor and offer views of the sea, golf course or archaeological site. They have a Mediterranean design and interesting features such as stone or wrought-iron beds. Each one is air conditioned and comes with an LCD TV.

The Masseria serves a breakfast buffet which includes sweet and savoury items such as homemade cakes, jams and ham. Dinner is also buffet style and features traditional dishes from Puglia.

Fee in the morning.

Afternoon free for relax in the beautiful Masseria with pool.

Fee in the morning.

In the afternoon visit of a local wine estate with wine and food tasting.

In the morning you’ll be involved in a cooking class to learn the secrets of fresh pasta, then your dinner today will be based on your efforts!

Afternoon free to enjoy the SPA.

This program is available as follows:

The program for 5 and 7 nights can be tailored based on your requirements.