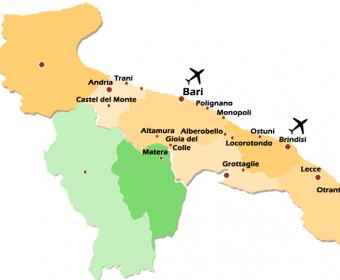 The most comprehensive adventure in Puglia – culture, history, food, you name it!

A comprehensive trip through the multitude of beauties that distinguish this surprising land. A wedding planner might report Puglia as the suitable location for the “bride in white”, and indeed the ancient Southern Italian cities are a triumph of light. From Matera, the city of stones dug out of tufa, Alberobello with its trulli, up to Ostuni, the white city, the whiteness is everywhere and never get bored: every corner, every newsstand, and every stone has a story to tell, we will take you by hand to learn how to listen.

Authentic and deeply anchored in its traditions, Puglia is a land to be explored step by step. In this way so you can discover all the beauties of Salento, a land border and bridge between East and West that saw the passage of peoples and cultures whose traces are still visible in the architecture, in the palaces and in small and large towns. Lecce, known as the “Florence of the South”, where messapiche influences mingle with Roman domination and the exuberance of the Baroque Lecce stone; Otranto and the Aragonese Castle with its stories and legends.

Private transfer from the Airport to the Hotel. Meet-up with your Italian guide and brief presentation of the itinerary.

Aperitivo on the Lungomare in Bari, with a glorious sunset view.

After breakfast the tour starts with a visit to an authentic underground oil mill with an opportunity to learn some valuable facts on the medieval peasant culture by walking through olive groves, caves and country roads. The Puglia region has over 50 millions olive trees and it’s the first producer of extra-virgin olive oil in Italy and the biggest single production region in the world.

Your day continues with a private guide visit of Bari, Puglia’s prosperous seaside capital,  with tangled streets and the charming old town reveal Romanesque churches, the riotous market and the elegant medieval piazzas, the beautiful St. Nicola’s Basilica, home of Saint Nicolas, one of the most beloved saint in the whole world and father of the legend of Santa Claus; guided walk to other remarkable historical attractions, seaside promenade and busy pedestrian shopping area.

After breakfast departure toward the coastal town of Trani, once the most important political-administrative centre of all of Southern Italy and as such was granted the title of main town in the region. This title was later revoked in favour of Bari by Murat and Bonaparte. We’ll visit the characteristic old town, hosting a Jewish quarter, its great harbour and its stunning Cathedral set right on the seafront. Lunch at your leisure.

In the afternoon we’ll move toward the historical area of Canosa, a Roman Empire outpost whose finds and vases are hosted today in many important museums and private collections over the world.

The city of Andria, Puglia’s fresh cheese capital, is our next destination, for a mozzarella and burrata tasting in a local farmhouse, accompanied by a selection of local snacks, cured hams and wine. You can watch from life all the daily activities that are carried out within a modern livestock farming with its production of raw milk and its derivatives.

After being delighted with a visit to the Museum of Confetto, small authentic masterpieces of the Italian confectionery art, we’ll make our way to Castel del Monte. Considered to be one of the most beautiful castles of Europe as well as an example of genius medieval architecture, this mysterious octagonal shaped castle is included in the UNESCO World Heritage List.

Dinner based on fresh seafood dishes in Trani and overnight.

The first foodie destination today is Altamura, hometown to the best bread in Italy, where we’ll visit an old bakery and taste the local glory, focaccia.

Transfer to Matera, in the Basilicata region, another astonishing UNESCO World Heritage Site: this city has gained international fame for its ancient town, the “Sassi di Matera” (meaning “stones of Matera”). The Sassi originate from a prehistoric (troglodyte) settlement, and are suspected to be some of the first human settlements in Italy. Because of the ancient and primitive scenery in and around the Sassi, it has been used by filmmakers as the setting for ancient Jerusalem: a good number of famous biblical period motion pictures were filmed in Matera, amongst which Mel Gibson’s blockbuster “The Passion of the Christ”. Lunch at your leisure.

To complete such a glorious day, what’s best then a dinner al fornello? In Gioia del Colle you’ll be served with various cuts of local meats in a butchery (yes, a proper butchery!) hosting some quite simple seating.

Transfer to a fascinating masseria and overnight in Ostuni.

TRANSIT TIME AFTER DINNER OVER 1 HOUR

Early departure toward the picturesque town of Polignano a Mare to admire the impressive panoramas from the seaside terraces overhanging the limestone rocks, with an unparalleled view over the blue-green Adriatic and why not, indulging yourself with a tasty gelato or granita, pride of the locals.

Lodging in Ostuni and overnight stay.

Early visit of Ostuni, regarded as an architectural jewel, commonly referred to as “the White Town” for its white walls and its typically white-painted architecture. Get lost in the hundred alleys, amongst workshops and Baroque churches!

With a pleasant trip through the dramatic scenery of the Itria Valley we’ll reach an awarded salami producer, where we’ll sample these gourmet delicacies.

During our drive, the countryside becomes more undulating and open with patches of oak forest, bisected by dry-stone walls, incredibly scenic it is rather reminiscent of Tuscany. You’ll begin to notice the distinctive whitewashed stone huts with conical roofs dotted across this bucolic landscape: these are Trulli!

We will stop in Locorotondo, the most beautiful balcony in the Itria valley. From its “belvedere”, you can admire territory that at times seems emotional: a mosaic made of small vineyards surrounded by stoned walls, scrubs of  Mediterranean forests and silver olive tree gardens that surround the old manor farms, thousands of trullo houses spread in the villages.

The white colour of lime wraps everything, it looks like flashing background of baroque architecture of local stones, underlining the intense colour of flowers on balconies.

In the afternoon guided walk of Grottaglie, the “city of ceramics” as it’s called because of the large number of traditional and artistic artisanal pottery laboratories scattered in this medieval town.

Dinner in a typical trattoria in Ostuni and overnight.

Early departure toward Lecce, commonly nicknamed “The Florence of the South” because of its countless Baroque beauties, with its lovely centro storico and Roman ruins; at your leisure, treat yourself to local delicacies like puccia (flat bread filled with your choice of salami and everything else!) and pasticciotto (sweet cake filled with lemon custard).

Rest of the day free at leisure.

In the morning visit of the coastal town of Otranto, at the eastern extremity of Italy, with its castle overlooking the harbour and the Cathedral, preserving an incredibly big mosaic pavement.

Back to Lecce, farewell dinner in a typical trattoria, brightened by a group of traditional Pizzica folk dancers.

Transfer to a beach resort in the Salento area.

Enjoy the caribbean looking beaches, the pool and the countless sporting options.

Relax and pleasure at the beach resort.

Relax and pleasure at the beach resort.

Price based on double occupancy, meals as below indicated.